Frameless glass shower doors are superior to shower curtains for a few reasons. They’re splash proof, they have great ROI, and they make bathrooms look much bigger than they really are. They remove the visual obstruction of the curtain and make the room feel open and airy. But keep in mind this only applies to clear glass – textured glass will make the space feel like it has an extra wall. 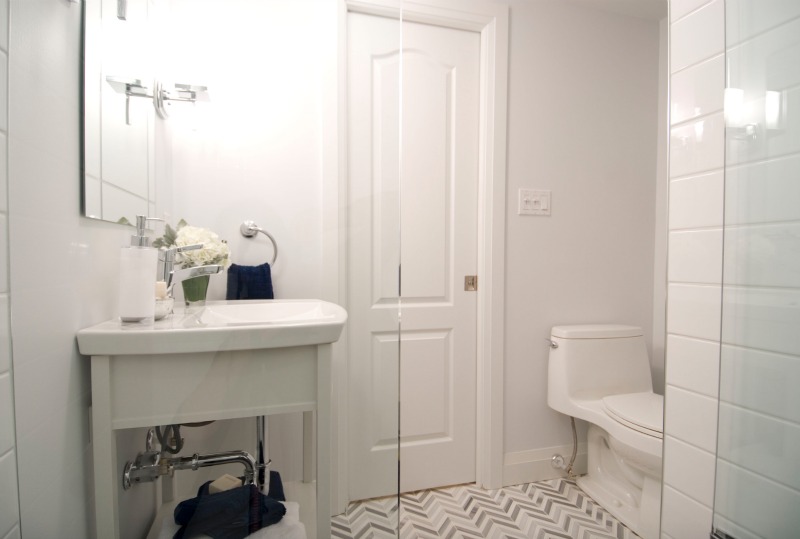 Doors that open up into small bathrooms can take up a lot of valuable space. If your home allows for it consider a pocket door that slides right into the wall rather than taking up floor space. If this isn’t possible consider a sliding door as an alternative.

Tile to the Ceiling

The key to making a small bathroom look bigger is eliminating as many visual obstructions as you can. A common one that I see over and over again is shower tile that stops just shy of the ceiling. Usually there’s some sort of space – either painted wall space or some type of wide trim – between the top edge of the tile and the ceiling. Although it’s cheaper than tiling all the way to the ceiling it makes the wall look truncated and awkward. Spend a few extra dollars and take the tile all the way to the ceiling for a seamless look.

Blend the Tile and Wall Color

When the tile in the shower area contrasts with the wall color in the rest of the room it breaks up the space and makes it look like they’re two distinct areas. It basically cuts the room in half. But if you use similar colors that blend together it will read as one large space. I recommend choosing something light in color and relatively neutral in order to make the room look as big as possible. 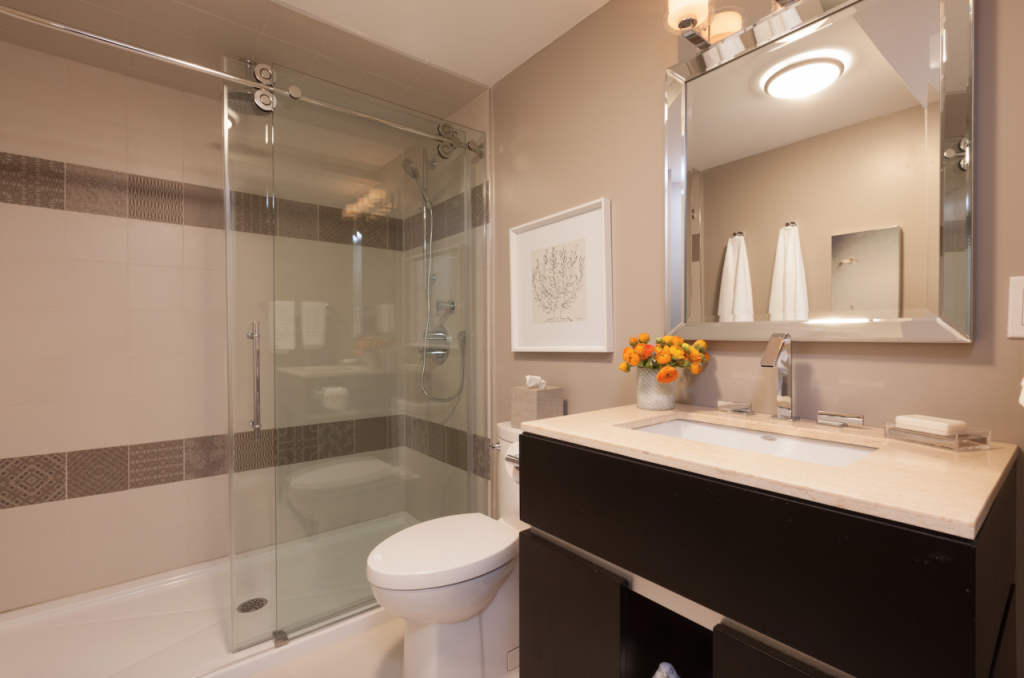 One of the keys to maximizing space and making rooms feel bigger is to use hidden storage. In a bathroom I suggest making use of the space between the studs to create a recessed shelving unit. It’s relatively easily to install and will eliminate the need for free-standing storage units. 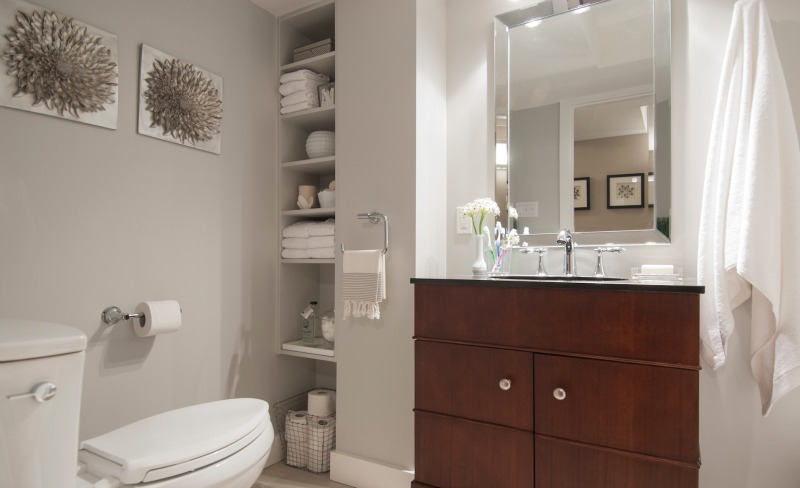 If you want to make a small bathroom look bigger I suggest opting for as large a mirror as the space can handle. Even if you have two vanities and/or two sinks, I recommend opting for one large mirror instead of two. Mirrors are necessities in bathrooms so you’ve got to have one, but they also reflect light and open up spaces so use them to your advantage in small rooms. If you have room for one that’s full length go for it, and over the vanity consider taking it all the way up to the ceiling. 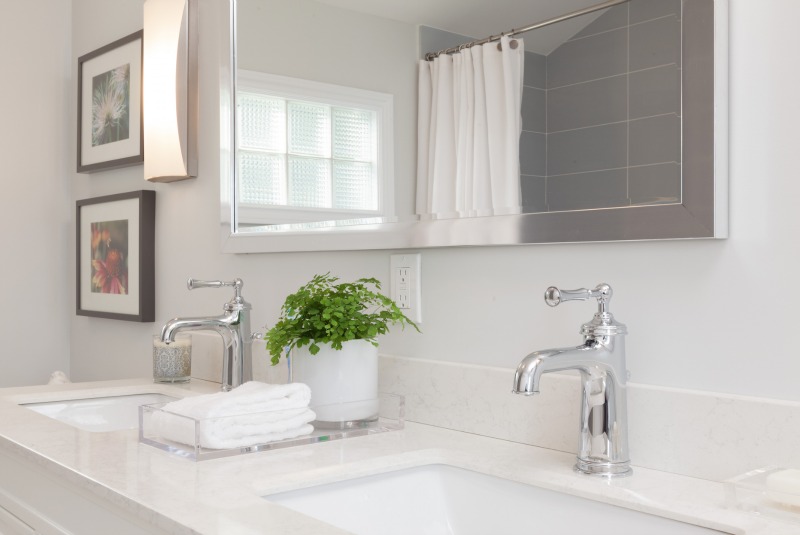 Poor lighting will make a small bathroom feel even more cramped than it already is. Make sure you have adequate general and task lighting, and eliminate shadows as much as possible. If you can you should install sconces on either side of the vanity mirror, and if that’s not possible install a light over the mirror – but make sure the light is cast at wide enough an angle so that it does not cast shadows on the face. Ultimately the goal in any bathroom should be to avoid casting shadows of any kind. 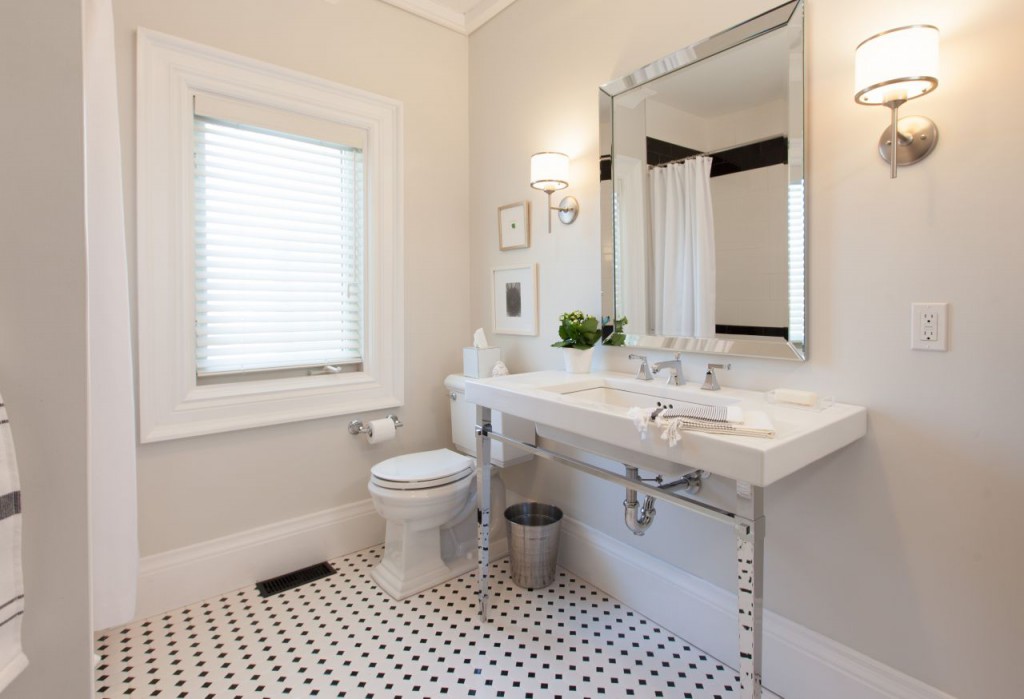 Heated towel racks are luxury items that, if you can afford the initial cost, will pay off with great ROI. And the other bonus is that they can act as replacements for radiators in small bathrooms. If you don’t have forced air or heated floors and you’re in need of a heat source, consider a heated towel rack instead of a radiator to save room and up the spa-factor.

Small bathrooms are a fact of life for a lot of people, but using some of these clever tricks can help you make the most of what you’ve got.

#WouldYouRather: A shower niche or a shower bench?

When we came across this funky farmhouse, it was i

We're wrapping up season 3 of #ScottsVacationHouse